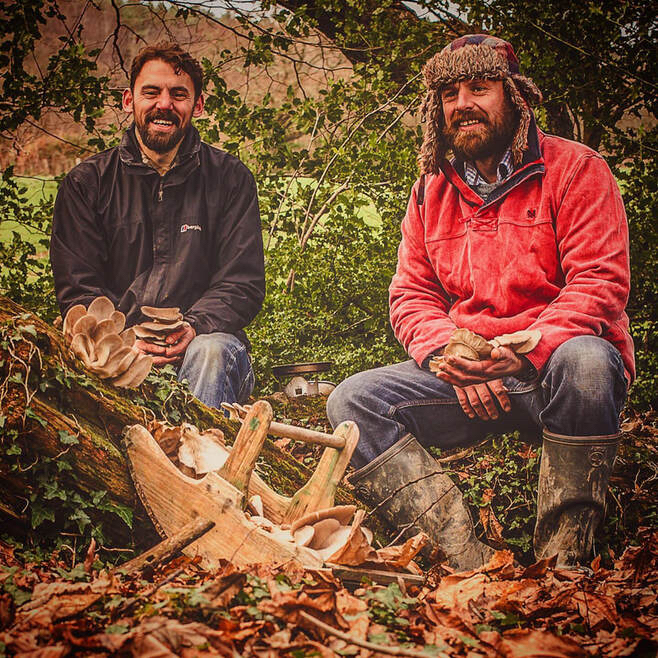 We are Chideock Champignons, a gourmet mushroom farm in Chideock, West Dorset. We call ourselves ‘gourmet’ because ‘alternative’ would sound weird and unpalatable, given the fact we’re talking about mushrooms. We grow oyster mushrooms, shiitakes, lions mane, wine caps and other wonderful mushrooms, different from your average closed cup mushroom.

Why fungi? Fungi is the most incredible species on the planet; different from plants and animals, it’s in a kingdom of its own. The largest living organism ever known is a fungal network. Fungi banks nutrients and water for trees to feed on at a later date, underneath the forest floor. Fungi is the great recycler, the maintainer of the planet – it helps plants and trees grow, kills them when they’re weak and breaks them down when they’re dead. It’s all around us; we usually only see the mushrooms that pop out of that fallen tree or your lawn.

What’s a mushroom, and what’s fungi? Basically, they’re two different things – fungi is the thread-like network of interweaving strands that grow out through wood or through soil. This interconnected mass is called ‘mycelium’, and is the living organism itself – it feeds, breathes and reproduces. The mushroom is the reproductive organ of the fungal network, essentially the fruit. It grows when the conditions are right and the fungal network is strong enough to enable its reproduction mode. The spores drop from the mushrooms, float miles and miles, before settling. This individual spores reach out to each other when food is readily available, and form a new network.

The mushrooms that we grow are ‘saprobic’; their job is to break down dead matter and aid its return to soil. Think of our grow bags as miniature recycling centres. The fungus spreads through the woodchip, sawdust or straw, sucking the lignin and other nutrients out of the substrate. The fungus will only reproduce when it has satisfactorily colonised the material around it. We grow it by washing down the materials mentioned above, adding mushroom spawn (spores, (seed, essentially)), bagging it up and letting it do its thing. Without these fungi, we would be kilometres deep in woodland detritus.

The other main types of fungi are parasitic fungi and mycorrhizal fungi. Parasites latch on to living organisms and kill it in order to grow. An example of this is the cordyceps fungi, which attacks ants, takes over control of their host, makes them climb as high as they can go before killing it, and popping a mushroom out of its head. Seriously.

Mycorrhizal fungi are key to the growth of plant life. Their mycelium connects with the roots of the plant, even going through the root and into the cell walls of the plant itself. It joins a multitude of plants and trees together, forming what is commonly called the ‘wood wide web’. The tree you can see now is connected to others using this network. The mycelium acts as a support unit – nutrients are taken into the bank and stored. One of these compounds that is taken through the network is carbon – fungi play an integral role in shifting the absorbed carbon from the tree, down through the network and out into the soil. There is more carbon in soil than in the air, and the network of fungi is very responsible for this.

It’s not yet possible to farm mycorrhizal fungi – the conditions required to grow are just too unique. We take all the unwanted pets from the mushrooms that we don’t sell and blend them up and spread them in the woods, in the hope they will grow one day.

The mushrooms that we do grow are healthy and useful in breaking down unwanted organic matter. One day we’d like to create a network of growers nation-wide who do what we do, to create a blueprint that others can follow. We also are always looking out for landowners who have a splurge of mushrooms on their land – we’ll happily identify any for them and if allowed access will spread as many spores in the area to increase fungal diversity and numbers.

If growing mushrooms or hunting them is something you’re interested in, check out our website https://www.chideockchampignons.co.uk/ for growing and foraging courses. Also, every other Monday from the 19th June we will hold a mushroom market at our farm, where people can come and see our range of produce.

We hope that through our efforts we will dig up the fungal kingdom to the outside world and that others will join us in expanding the network.

To hear Nick talking at the Bridport Food Festival in June this year, click here.