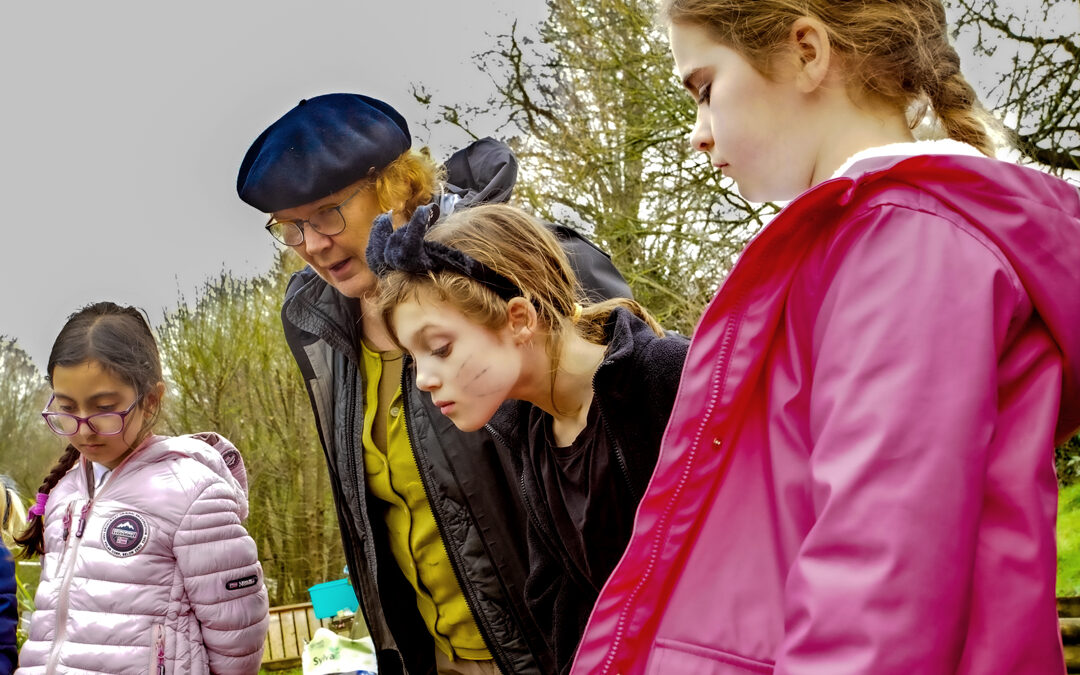 Find out what inspired Sarah to become involved in food, which has led her to participate in several of the important community-driven local food projects in Bridport – from the primary schools, to the glut stall and the food festival, with her passion for education, climate change, health and poverty alleviation. [Photo credit Robert Golden. Looking in to the pond at Edible Gardens.]

What was your journey to growing and being involved in food? What inspired you to get involved?

I was the fourth child who group up in a 40’s house in Northampton. My mother was a great traditional cook who kept lard and dripping in the fridge from several meats. I was the favourite of my dad. He grew many vegetables, soft fruit and had an orchard of trees. I was lucky enough to go fly fishing with him. And most importantly my best friend Jenny was the daughter of a tenant farmer in the Althorp Estate. My idyllic summer holidays, in the early sixties, were spent roaming the farm and countryside. We were given a fry up breakfast and then left the farmhouse to explore the woods, quarry, and barns of the farm. We came back home just before it got dark. At harvest time I remember sitting on the trailer and helping to lift the bales of straw.

I was always interested in art and design. Within 10 years of leaving school, I was in London teaching at inner city Comprehensives, at the first of which I met Carol Klein who left to set up a nursery in Devon. The last school had 1700 girls and I taught textiles. The food teacher had a dreadful time because no money was given to the subject: all the resources were in IT.

Moving to West Dorset, when I retired, I took an MSc in Sustainable Design at Bournemouth. This created my basic understanding of the role of the environment. I met two key people in Bridport: Dave Rickard to whom I gave a lift back from Dorchester when the snow was so bad the bus didn’t run. I had heard him talk about the new Transition Town Bridport he had just set up. The second inspiration came from Robert Golden, who, with his wife Tina, had just founded ‘HOME in Bridport’. They wanted to use cultural, agri-cultural, and cookery workshops to encourage people in Bridport to grow food and to learn better cookery skills. This would improve their health and wellbeing.

So, in March 2014, I helped organise 80 people, including children, to raise a second hand polytunnel, in St. Mary’s School in Skilling, where the school cook gave them a hot meal. I was the volunteer co-ordinator. The Edible Garden there has grown from strength to strength, and St Mary’s has become the most popular primary school choice for parents.

Sam and I had fallen in love with Bridport, and then moved into the very centre during the pandemic in 2020.

What are the main things you want to share about the Edible Gardens projects?

Children at St. Mary’s have learnt to grow, cook, and eat a wide range of vegetables and fruit. They now have their own orchard with many kinds of fruit.

Through these programmes we’ve had some effect upon the parent’s attitudes about their children’s diets, and perhaps some effect on the parents as well. Kids not only make the connect with where things come from, e.g. a chip is a plant fruit grown underground, but they make contact with nature and the soil. These practical workshops bring vibrancy and meaning to their school topics. Time spent in gardens provides sensory breaks from mainstream education. It develops active lifestyles outdoors.

Now Bridport Primary School has begun to do the same, where a derelict garden has been brought back to life and a 20-year-old tunnel frame resurrected. Their ‘Raising of the Tunnel’ happens on Thursday 7th April and all are welcome to take part because it is a community event. Post-Covid this is the first celebration to be held for families since 2019.

In what ways are the Edible Gardens growing food in ways which take account of climate change? Why is this important?

It is the children’s generation who will have to live with climate change and this is happening already. Only last week year 6 was doing a workshop on how to grow microgreens when half the garden was flooded. Cosy in the polytunnel there are flowering broad beans which are not affected by the howling wind and rain. As a Bridport Food Matters ‘Allotment Ambassador’ the gardeners are growing plants which are adaptable to the changing weather. Soon we are to plant a nectarine, in a sheltered spot, because summer temperatures are rising. There are more perennial vegetables because they are hardier and all seeds are organic because they are more likely to survive. Professor Tim Lang predicts the UK Food system is very fragile and what we choose to grow must not be too internationalised. Processed food is full of fat, sugar and salt; all likely to bring on obesity. Food security is a major concern now.

What do you hope for the Bridport Local Food Group, and their Food Festival?

I have been a volunteer with the BLFG for several years and this year its Festival is back to its former site. It is a really popular event and for the second time there will be a pop-up kitchen workshop in several primary schools. Kathy Dare, the Chair of the BLFG, is amazingly good at persuading all our local producers and hostelries to take part. This year there is a marquee called ‘Love Food Hate Waste’ with lots of interesting cooking competitions and demos which use up food often thrown away. Low energy cooking is another theme which helps to reduce your energy bill.

What are your hopes and dreams related to food?

I hope that in the future the corporate power of food systems would be less. There is a monopoly of big players in food production which controls the supermarkets. I have found that anxiety has forced many people in lockdown to order all their food online and so they no longer have any idea what is in season, and have no clue as to who are our local producers. It is said that if you spend £10 in a local shop which sells local stuff from local producers, the amount of money that goes back into your local economy can be £50! Also, there is a role for government to control unhealthy processed food, by law, and to educate people about nutrition.

What are the three most important things you think we can all do?

Why does ‘Bridport Food Matter’, to you?

Since the Summer 2020 I have been involved with the Food Glut stall*. We are a great bunch of friendly volunteers, and I recommend you do it too. For me it started with allotment-keepers giving away their gluts in the summer and autumn, because nobody wants to waste food. But, of course, many people can no longer afford to buy food. Bridport Food Matters has evolved as a group of people who want to ensure that food poverty cannot happen. This can be done through simply redistributing waste that comes from many sources such as overstocking, harvest overproduction and hospitality over-ordering on numbers. Couple that with learning to cook and ways of preserving food then you have a better way. BRIDPORT FOOD DOES MATTER.

The Food Glut stall operates on Thursday mornings from 9.30 – 11 am St Swithun’s Church forecourt, with surplus food from local growers, retailers and supermarkets. All food is free or for a donation. All are welcome.